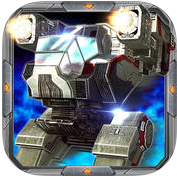 When it comes to a game that induces the player’s mind into constant action and skills application, the ultimate experience is getting absolute fun and great fascination. To make it more exciting, a game that gives one an opportunity to customize different features and upgrade into greater capabilities will always make a player want to have more of it. This is exactly what the Mech Rush app game is offering its players; a totally engaging and rushing experience worth trying! How about taking great mission into different worlds and becoming the ultimate conqueror? Isn’t it something that brings great pride, a sense of accomplishment and prowess? Then it is clear that the Mech Rush is set to entirely bring that game success right at the one’s convenient device once downloaded.

Created and designed by the Booty Bay Limited, Mech Rush app game was recently updated on 16th May, 2016. This has made it to fix issues related iOS data storage especially in the cloud. With other improvements adopted within the game, this has made it worth playing for any novice or a professional game player. Getting Into the Game

Mech Rush is completely a game that kicks off with a resounding impact and keeps the player alert for the entire period of the game. How is this possible? Actually, this is a game that gives the player the ability to control and boost the speed of Mech as it runs. In addition, the player is required to overcome all the objects and different items on the way in order to safely accomplish the mission. Once Mech has been armed with essential weapons, it can launch attacks on different bosses and opponents on the way so that the ultimate destination is reached. This is quite challenging as attacks are fast and quick. Thus one needs to be alert always!

With the high quality formation of Mech Rush app game, the player will be required to have the best device in order to perfectly enjoy the game. Devices with strong capabilities like the iPad, iPod Touch and iPhone will absolutely integrate well with this game. Besides, one needs to have installed version 7.0 of iOS or possess a more new operating system presently in the market.

The features described below are the ones that the user is likely to come across them on this Mech Rush Game. Take a look at them: Become a conqueror in different worlds

There are plenty of new worlds that the player is required to discover in this game. Using the fast-paced Mech, the player needs to make it through as many worlds as possible and conquer them with great brevity. Fast speed is paramount in order to achieve this!

With the presence of different resources, unique fighting skills and strong capabilities; the player can apply them and come up with a superior and powerful Mech. This can highly contribute in making missions successful.

What are power-ups designed for? They are actually stimulating items that will considerably improve the overall results of the player. They tend to trigger an increase in speed and make the player gain an advantage over opponents. They are worth trying out! Get New Characters on Board

In order to unravel new characters, the player will need to conquer the boss who is controlled and managed by a particular pilot. Once the puzzle on how the pilots operate is unveiled, this can create a way of gaining more characters especially the pilots.

Once the Mech has been improved through application of new upgrades, it stands a high chance of competing effectively with other opponents. This is because its speed, performance and capabilities will significantly increase.

Below are amazing pros identified in the Mech Rush app game together with some cons:

· Versatile with a great application of weapons

· Easy to unlock different levels to get new exposure

· Performance is amazing and satisfactory

· Occupies great space that may reduce performance during play

With a considerable 5 star rating from its users, Rush Mech has proven beyond doubt that it is a game worth playing! The efficient seamless performance, amazing design and high quality graphic effects are some of the features that uniquely identify this incredible game. Being downloaded for free (size 104MB), this is a top-notch game that awaits an ardent player. Get it today and have unstoppable experience!