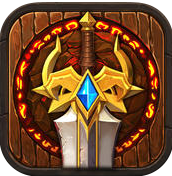 NewJoy Entertainment has recently released a new Iphone App named Blade of Elemental. This is an action role-playing the gaming app that allows you to emerge yourself into the game and essentially live a second life through the character. Players travel with this character and take on vicious monsters with the aid of spell casting and weapons. At the touch of your fingertips, players can even cast up to sixteen different spells including fire, earth, water, and more. Each battle increases in difficulty challenging the player to keep going and rise up through the rankings. The spikey, brunette character is the avatar that players guide through the vivid landscapes. The character is controlled with a blue cross-like cursor that allows players to move the character around with their fingers. Just as the spells are entirely based on elements, so are the creatures the player fights. From bulky rock monsters, to quick twister-like monsters, the fight is always on. Players can collect gold and equipment as they travel that can help them advance through the rankings and gain more powerful objects and spells. Some of the pros of this game is that it keeps a sense of realism. The graphic design is expertly done making the player feel like they have really been inserted into the game. The damage done during a fight, such as burns, last until regeneration also helping keep the realism up. Another helpful feature allows players to learn about the monsters when they die. Also, because the monsters increase in difficulty, each new slay can be done slightly different than the last making the game force players to get creative when they battle. The game also has a feature that counts the consecutive hits on the side that encourages players to challenge themselves to score higher and higher. The game also does not need wifi to play once downloaded, and with the low cost of about $0.99, it is easy to see why so many people are getting addicted to this game. However, despite all of the great features, the game seems to lack originality. There are hundreds of games out there that players run around harvesting gold and other equipment so they can continuously buy more ways to power up and fight the increasingly harder monsters in the game. This is actually a very common theme in action role-playing games. Whereas it is fun to crush and slash monsters for the first hour, after a while it soon becomes repetitive.

But despite its lack of originality, some people are still suggesting this to be “the best game ever”. Though, given the four and a half star ranking, there could be some truth to this statement. A spokesperson for the Blade of Elemental states, “The game is not about killing the time, but it is about transporting the players into this wonderland in which they can only deliver justice.” Blade of Elemental is a difficult but entertaining game with lots of twists and turns that any role-player will enjoy.