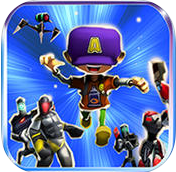 A fast-paced, mission-oriented game can be quite fascinating and engaging. This is especially due to the fact that the player will be required to be attentive throughout the period of the game. The challenging experience during the game session can require the player to upgrade on the gaming skills in order to ultimately come out successfully. Robot Clash Run is such typical game that introduces the player to an endless runner mission encompassed with turns, tunnels, slopes and twists. The arcade levels needs the player to prove prowess by acting fast; this is either by jumping, flying, kicking and switching lanes. The Operation of the Robot Clash Run

This fascinating game introduces the player to a challenging experience where skills and speed are absolutely needed. There is more of jumping, switching lanes, flying and even kicking the robots and drones that are found on the way. As the player move along the way, there are lots of burgers, pizzas and fries that one can catch and earn points from them.

There are numerous drones and robots that are consistently attacking the earth. It is for the player to combat them by using special weapons and jetpack to bring them down. Meanwhile, there are lots of obstacles on the way that may reduce the speed of the player. Beware of them and evade them!

Since its release and recent update on 27th July, 2016, this version 1.5 of the Robot Clash Run has displayed exceptional performance when working on the following devices; iPod Touch, iPad and iPhone. Besides, it has proven to be well compatible with iOS 8.0 or any new version available in the market. Below are the unique features noted in the Robot Clash Run game:

As a player, one should be equipped with skills to hunt down the drones and robots that are found both in the sky and on the earth’s surface. The player can use flying techniques to bring down the drones and even launch hot dog missiles to destroy the robots found on the ground.

There are lots of pizzas, fries and burgers that the player will come across when running across different lanes. Apparently, the more the player grabs most of them, the higher the points gained. Besides, these snacks are known to boost the speed of the player while running in this endless run.

Use jetpack to attack and raid drones

In most situations, the player will realize that drones will be mostly found in the sky. The player can use the jetpack to fly high, launch attacks on the drones and raid them of their supplies. The drones are known to have great supply of fries. Collect those floating fries and earn numerous points.

Jump, Fly and kick at a fast pace

The player has the capabilities of using any skills available to ensure that the drones and robots have been ultimately vanquished. This include either through jumping, flying, kicking and use of any special weapon to fire on the intruders. This should be done as fast as possible when the player is still in running motion. Clearly, Robot Clash Run game has integrated a high quality classic design that comes along with great touch controls that are quite simple to use. On the other hand, the high pixel colorful animations that have been adopted make the entire gaming experience fun and worth playing more and more.

Here are the notable Pros and Cons found in Robot Clash Run app:

· Rewards awaiting those who catch snacks

· Infrequent in performance especially when at top speed

Robot Clash Run is a fascinating game that has proven to deserve a 5-star rating due to its incredible performance. The awesome features that have been integrated within this app such as amazing colorful display, simple touch controls, highly sophisticated weapons and numerous earning points clearly exhibit its great capabilities. It is absolutely worth downloading (for free) at App Store. Don’t miss that gaming moment!