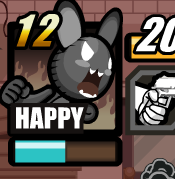 HappyRabbitShow has announced the release of a brand new app expected to be released soon to the app store. Happy & Smile will contain the game, a new app game available to smartphone users and mobile gadgets. It is a game very similar to Beat ’em up game in its cartoon form and method of playing where the user only needs to touch ant slide their screen. It is made by HappyRabbitShow, a studio based in the Us and Europe. Just as the name implies, City of fighting consists of arcade and card action where the player can collect a variety of cards to build up a character used in fighting enemies. This way, the player is able to proceed to the next level and so forth, just like in Double Dragon game. When roaming through the arcade, the player’s character attacks rogues within a specific period of time and in the end, the character is in a face off with the boss, if the boss is defeated at this point, then the player wins the game. The user can also use cards to summon weapons and vehicles to support their character secure a win, just like in Clash Royale. In order to win the game, the player is required to optimize their card deck strategy in every chance that arises. The characters built by the player by collecting cards are known as heroes, with each hero possessing a unique ability which continues to upgrade in each level. The more cards are collected, the more options are availed including team mates, weapons and vehicles. The game is said to be addictive just like other games in its category and suitable for all age groups. It is hard to start using this app but once you have started, it will become part of every day’s activities. The gamer will find themselves focused on improving their playing skills to achieve success, making them addicted to the game.

Although the app has not been launched yet, it has already won the first position in the Weekly User’s Choice and Daily feature at New grounds. The app is however expected to be launched anytime this year, first in the Us and Europe markets as iOS and AOS category, where is will be available to mobile devices.

HappyRabbitShow is a game connections studio that has its headquarters base in the US and Europe. It is creating game contents for the global market using creatively designed characters, made for the sole satisfaction of the app users. The studios aim to produce games that will be enjoyed by all categories of people regardless of their gaming experiences. It will be available worldwide in different languages in order to cover a wide variety of users. The studios have won the following awards so far: Game Connection America in 2015, Korea game Connection Audition where it too the first place, G-Star Bic Showcase selection and Tokyo game Show Indie Game area selection.