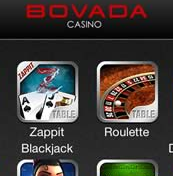 Bovada Casino was established in 2011, but their history goes back way further than that. Bovada Casino was once the Bodog Casino, which established itself as one of the most respected brands in the gambling industry well before the 2010s. Since rebranding as Bovada, the quality of their products has remained. With their ability to accommodate American bettors, and their wide selection of casino games, Bovada Casino is still one of the best in the industry.

It is important to remember that the U.S. Bovada Casino app is not available in the iTunes App Store or Goole Play as they don’t support apps that are considered online gambling apps. Instead, players will have to use their web browsers to take advantage of everything Bovada Casino has to offer. Fortunately, Bovada Casino is sleek and easy to use on mobile browsers, eliminating any concerns associated with not having a mobile app available to Americans. It is worth noting, though, that Bovada does restrict use of their site from players from certain states, so be sure to check on your state’s status before you try to sign up. Bovada has a massive quantity of online casino games to choose from. As far as slots are concerned, Bovada touts that they have doubled the number of slot games available to players since they opened. They offer anything from penny slots to bigger games with massive jackpots. They even offer games featuring what they refer to as mature content, such as A Night With Cleo, a slots game with a jackpot of $80,000. We’re not here to judge.

As far as deposits and withdrawals go, bitcoin is the best way to play at Bovada Casino. In general, bitcoin is the fastest and easiest way for casinos to receive your deposits and to send you funds, as they do not require the same vetting that credit cards and traditional banking transactions do. Bitcoin also doesn’t require the same fees that those other forms of payment do, making it beneficial to everyone to perform deposits and withdrawals via bitcoin.

Bovada Casino does also accept credit card transactions among other funding methods, for players who are not yet using bitcoin.

Speaking of bitcoin, Bovada has a huge promotion in place for players looking to use bitcoin. They are offering $4,500 in bonuses to casino players who use bitcoin over the course of three deposits. These are 150% bonuses, so each of the three deposits need to be of at least $1,000 to claim the maximum bonus amount of $4,500. There is a 25x playthrough requirement for these bonuses, but they are definitely robust enough to give you a chance to get there without any issues.

As far as support goes, Bovada Casino offers phone support as well as support through a form on their website. They have a good reputation as far as customer support is concerned; something that is required for any online casino brand to have done as well as Bovada has over the years.

With a large selection of slots and table games, and a huge bonus for players who use bitcoin, Bovada Casino is one of the best online casinos around, for reasons that go beyond just their reputation and longevity.