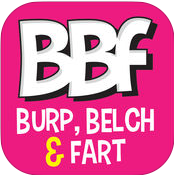 The BBF iOS app refers to Burp, Belch, and Fart a hilarious memory game created for the Apple iOS platforms where a player animates characters in their devices through clicking or tapping on lit buttons in sequence, which causes them to perform funny bodily reactions such as belching, burping, farting, sneezing and even snorting! There are about six characters to choose in the game whom you can be able to play with, and different levels as well. The difficulty also increases in each level that you play, and you will be able to earn bonus points depending on how quickly you click and even funny phrases. It is also a free to install game which has just been released recently. If you are a fan of funny memory games on the iOS platform, then the BBF iOS game would be the best option for you. This is because it comes with a number of levels, fun challenges where you are also able to build on your memory as you play. There are a number of features that make it, even more, fun and interesting such as;

Support on all apple or iOS platforms: It has been designed for iOS platform in both iPhone and iPad where it is able to run automatically upon installation

Variety of characters: Different players would want different characters to play with, and therefore in this game, you will be able to choose from up to 6 characters.

Multiple levels: It can really be boring if you only have one level of game play and that’s why you will find a number of levels with increasing challenge as you progress. Variety of funny bodily actions and sounds to choose from: Just as the characters are different, you will also have a number of bodily reactions, such that you can choose which is most interesting.

How it Works
Gameplay with the BBF iOS is really easy once you download and install the app, which is free of charge. You will have five buttons on the screen, namely; Belch, Burp, Fart, Sneeze, and Snort. Each of these buttons will animate your character to execute a funny bodily action depending on what you select, for instance, the character will belch once you tap on ‘Belch’. You will need to tap on the buttons swiftly in sequence such that you are able to gain bonus points as well as phrases. There are different challenges you will experience with the levels gained which makes the game even more fun. You will also have an option to select the character of your choice among 6 different characters. – Does not require much space on device to work

– Fun and challenging at the same time

– Supported only on iOS devices (especially iOS 8.0 or later)

– It may have preference only for a particular audience

– Since the app has only been recently released, it may not have gained full trust and recognition in the marketplace.

Having been recently released, the BBF iOS app is a game that is quickly gaining its way into the apple and iOS marketplace as a hilarious mind game. It is also a really addictive game where you will have multiple levels with different challenges just to elevate the fun. The different characters introduced in the game to choose from, also reveal the targeted audience who are generally the kids. Adults can also choose to play as a mental challenge and just for the fun of it. Download and try it today for an ultimate fun experience of a lifetime!