DEFENSE OF ROMAN BRITAIN TD: A GAME HAVING A UNIQUE STORYLINE! 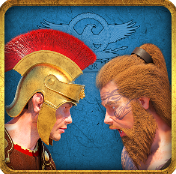 What do you mean by a Tower Defense game? Is it a game where you have to defend yourself from the Towers? Probably, the answer is ‘No’. It’s a little bit similar to that, but not exactly means. If you’re updated with the gaming industry, then you might know that the Tower Defense games were one of the games that really captured the mobile gaming audience. The reason being, such kind of games are easy to play and are full of fun. They have simple, one touch controls, all you need to do is to build a good strategy to defend your territory. Today, I’ll introduce you one such game which is really a great source of fun and entertainment. It’s known as “Defense of Roman Britain TD”, a Tower defense game.

Defense of Roman Britain TD has been developed by First Games Interactive and it’s compatible with all the Android Smartphones having the latest version of the OS. The game is available in many languages such as Russian, French, Spanish, English and German languages. Defense of Roman Britain TD has a nonlinear storyline and contains exciting quests. The story behind the game is that the Roman legions landed for the first time in Britannia 10 years back. Celts and Brits tried to resist, but the Roman army was stronger. During that time most of the Britannia’s territory has been captured, but the war still continues. So, in this game you have to act as a young Roman commander whose main objective is to help the Roman legions defend from the barbarians living in Britain and complete the mission. However, the task is not so easy, but you’ve to put efforts in playing it as much as you can!

Defense of Roman Britain TD offers more than 60 levels to play with each and every level being different and having their own difficulty level. It provides 8 kinds of defense towers and weapons which you can upgrade whenever you want. There are more than 30 types of enemies from which you have to defend the Romans from the barbarians living in Britain. You need to build an awesome strategy, fortifications and towers on the way of the enemies to hold the enemy attack. You can win epic battles by destroying barbarians. There are different kind of weapons such as grenades, bombs, Tribulus, lightnings, Greek fire, poisonous gas, frost, and meteor rain which you can take advantage of to personally control the battles. You can also upgrade your weapons and spells and use different tactics to complete the levels. After all, it depends only on you how you play the game and save the Roman Empire!
In a nutshell, I want to say that Tower Defense is a game that all of the game lovers must have in their game collection.