Blow Boredom Away with the Angry BaBa: Hit and Far Away Game By: Erin Konrad 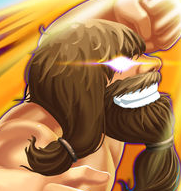 Feeling bored is the worst. Whether you’re stuck in line, in a waiting room, or just sitting at home, being bored can feel like torture. Luckily, there’s a game called Angry BaBa: Hit and Far Away that will instantly entertain you! This app lets you get immersed in the action of hitting targets so that you’ll immediately forget about feeling blah. Instead of sitting around twiddling your thumbs, you can put your skills to the test with this fun game.

Head to the iTunes Store or Google Play to download the free app. It’s fast and easy to get started, so your boredom will be diminished quickly! The goal of the game is to use your avatar (which can be a Giant, Zombie, Golem, Santa, or Robot) to hit the targets that appear on your screen. These targets can be a variety of flying objects, including meteors, missiles, space worms, and UFOs. When the target hits another object (such as a pelican, space turtle, or space stingray), rubies will appear. These jewels can give you extra bonus points to add to your score. Every round will allow you to see your score grow, and the constant gameplay will definitely have you forgetting all about your boredom

The Angry BaBa: Hit and Far Away game, developed by Gameday Inc., will have you drawn into the action right from the start. The 3D graphics are colorful and vivid, so you’ll feel like you’re right in the thick of it, swatting at targets right and left. The sound effects also add a silly, light-hearted tone to the game. And because you can keep improving your score with each round, the game will keep you from losing interest as you progress. Each level offers more challenges, so even though the gameplay might seem simple at first, there are plenty of other obstacles in later levels.

Although you won’t get bored playing Angry Baba: Hit and Far Away, there is a chance that you might get frustrated by all of the advertisements. There are banner ads that pop up on the bottom of the screen while you game, and video ads that interrupt your play between rounds. Also, if you want full access to all of the game’s features and points, you’ll need to make some in-app purchases. If you’re not expecting to have to shell out dough, this can be a turnoff. However, you might be content just playing the easiest levels in an attempt to pass the time without having to pay extra.

Make sure boredom is a thing of the past when you download the Angry BaBa: Hit and Far Away game today!