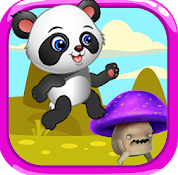 Are you familiar with the platform games? If not,  First of all I’ll tell you what are those games? Basically, it’s a genre of video games and subgenre of action game. In these kind of games, the player controls a character to jump between suspended platforms and avoid obstacles. Sometimes, you need to jump and climb, according to the upcoming path or situation and save the character. These types of games are quite interesting and never bore a person. The most common element is the jump button or swiping the touch screen nowadays. Platform games were first invented in the year 1980 and since that time they are gaining very much popularity such as the Mario games.

Today, I’m going to introduce you one such platform game which will definitely blow your mind. The Super Panda Adventure Tour is the game which I’m talking about! It’s an exciting jumping platformer for all the ages. The developer,  Craig Giannelli was inspired by the old classic platformers of the 80’s, so they decided to launch a similar one with latest features. The app requires iOS 10.0 or any later version of the Operating System on your iPhone, iPad and iPod touch.

The app offers almost 45 levels to play over 3 amazing worlds. In this game, the lovable Panda goes on an adventure tour. You’ve to play the character and help Panda win in the journey. However, there will be many obstacles in your path, such as battling slimes, bats, crazy mushrooms, Yeti’s and a large variety of other monsters. But, you have to avoid all of them by playing attentively. If I tell you the secret of succeeding in this game, I would say that you should pay attention to the game because the game runs very fast and the enemies can destroy you!

Super Panda Adventure is a super-addictive game and will hook you for several hours. You can play the game without any disturbance from the annoying video ads or any popups. The game is purely based on fun and entertainment. Now, you might be thinking what’s the interesting thing about the game! Are you going to walk and jump only or there should be some surprise which will encourage you to play the game. Yes Of Course! There will be coins on your path which you can collect simultaneously while moving. The more the coins, the farther you will go and secure first position in the Leaderboards.

The graphics of the app are superb and the game controls are very much easy so that anyone can play. The game seems to be easy in the beginning, but as you progress further it becomes more and more challenging. Because the enemies are very much intelligent and will try to destroy you and stop you from winning.

So, what are you waiting for! Download this epic adventure game now!

It’s available for free on the iTunes Store with some in-app purchases also.