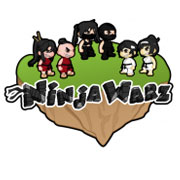 On top a mighty cloud awaits your training ground. It is your home and the place where you will train your clan for battle. You start Ninja Warz by choosing your clan. Pick between the Fire, Lotus, or Shadow clan. You are lead to the cloud which includes such locations as the dojo, hospital, recruitment building, magic shop, relic shop, and weapons shop. This map is small and easy for beginners to navigate. Ninja Warz provides all helpful information through a short tutorial including pop-ups for useful info and arrows pointing to the right icons. Recruit your first Ninja to start forming your clan. Ninja Warz categorizes its ninjas based on their price, health, blood type, and power stats. Before your ninja is ready to fight, he needs to be trained and equipped with a weapon. Training your Ninja is done in the Dojo. Ninja Warz allows ninja training through the use of Karma. Karma is one of the currencies available in Ninja Warz.

Training increases your health, strength, and gets you to higher levels. Don’t forget to equip your ninja with a weapon, this increases his skill in battle. Relics add a percentage to your clan’s health; relics are bought at the Relic Shop. Hop into the air balloon and travel to the battle zone. Click the clan you want to fight and make sure they are not tougher than you; if they are, you won’t win that battle. Ninja Warz does not allow you to pick how you want your ninjas to fight. Instead, your ninjas fight in a dust cloud where you cannot see any martial arts, critical strikes, or combos. But you can fight with as many recruits as you have. Winning a battle gives you experience points and gold. If you lose a battle, take your ninja to your hospital. A positive attribute about Ninja Warz is that your ninjas recover very quickly from battles. It literally takes seconds to recover your health.

Use gold to buy more weapons and relics to win more battles. Leveling up unlocks newer more powerful weapons and gets you more karma. The magic shop allows you to ally with friends. The Doimyo icon gives you free daily rewards and there are over one hundred achievements to unlock in Ninja Warz. You can also join tournaments where you fight against multiple clans to win special weapons. The positive about tournaments is that your health replenishes in full after every battle won. Though you cannot choose your style of martial art in Ninja Warz, the act of training and equipping your ninja clan, and watching them reach the highest ranks is well worth it. If you train your clan well, it will become mighty. If your clan is the best, you will not only survive the battle, but win Ninja Warz.