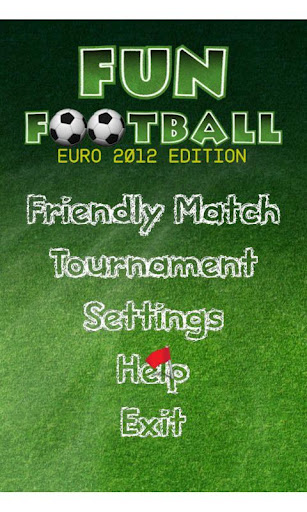 When everybody is heading towards one of the most anticipated tournament of the year 2012, The Euro Cup, UBJ3D have come up with the perfect gift for the fans on the right time. The developers of the android app “Fun Football-Euro 2012” must be looking forward to the response by the users and we can assure it to be mostly positive. The game is free of cost and differs from the traditional football that it is a turn based game i.e. first you will be playing and passing the ball to your players and the opponent team will just block you but not move. So, you only need to pass the ball accurately so that it reaches the striker; otherwise the turn will get revised to your opponent side if the ball stops and the opponent player is closer to the ball. Sounds simple? I guess it’s not. Of course, the controls are very easy and you just have to drag back your player to kick the ball in the right direction, but there are four different characteristics for each player that determines the overall team strength. They are the precision, mobility, technique and power which determine the skill level of each player on the field. With a different set of values for each player, it depends a lot on you as how better team selection you do. The game play goes like this. There are a total of 16 national teams as in Euro cup. You can opt for a friendly match or a tournament. Moreover, you can play it multiplayer with a maximum of 8 players in one session. There are three difficulty levels and three weather conditions available, which affect the movement of the ball on the turf. Each game consists of 5 players with one alternative player available for each one of them. Only the striker and midfielder can dribble the ball with the opponent’s defenders. Talking about the graphics, the game looks pretty attractive and the turf looks very real as it is in high quality games. The sound effects are very good and you can hear the crowd cheering up for you. There is not much to discuss about the player movements and response as the game is turn based and most of the time, only a single player is playing who himself is positioned at a fixed place to just kick the ball and pass. So, the excitement seems to go a little bit down and you start getting bored when it’s your opponent’s turn. However, the multiplayer mode sorts this problem out to the most of it. So, overall the game works much better as it delivers something fresh and new to the concept. But the concept could have been modified a little more and should have not lost the original touch of football. The game works better for large screens more than 7” in size. So, it is mostly suited for tablet pc but can be played comfortably on mobile phones as well. So, I will recommend you to support your favorite team on and off the field.