Catch The Train – A ‘Messy’ Journey 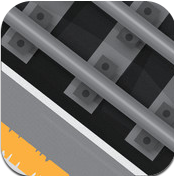 Chaos! That’s the first word we could think of to rightly describe the atmosphere in a metro station during rush hours. ‘Time is money’ is the golden rule being followed by every passenger. As soon as the train arrives and the gates open up, the patience of the human nature is about to be tested as a constant push & pull game is followed for the next few minutes until the train finally leaves the station. But what if it’s your job to handle the situation on your finger tips? Screwed up with lot of confusion? Don’t worry! Let’s clear it up together. We are talking about the new iOS app, Catch the Train that has been developed by the quirky named developers, Two Sore Thumbs. The app is compatible with iPhone, iPod touch and iPad and requires iOS 4.0 or later version. You are provided with some ‘angry-birds’ like commuters and it’s your job to board them all up the train in the given time limit. The game starts with the train coming and three doors will open. You have to drag each commuter one by one on-board. But the twist is yet to be revealed. First, there are three types of passengers and corresponding gates for each one. Any commuter will enter the train if and only if matched with the right one. Second, all the gates keep on switching relative positions continuously. So, you need to be fast and smart and keep an eye on each one of them. And the things go hard as you gear up for higher levels.

The problem is, if we could just end the review right now, it would still have been complete without much appreciable error. Though music is something to boast about and we really liked the combination of Dub step and Hip-Hop genre, there is nothing left that was soothing to ears or eyes. There are numerous ideas that we could think of just while playing the game, don’t know how the developers missed it. Graphics part was very limited; neither did we found any change in the game play from the start to the end. It could be related as a journey from one country to another via different stations. Also, there could be some obstacles or challenges as the game progresses. For example, there could be a no. of guide ways to reach the gates. This would have been much ‘technically challenging’. Also, we would like to see some tweeting tools for Facebook, Twitter, etc. But last and the most countable factor was the absence of leader board. There is no hard drive to store your high scores. So, better learn them up or mark them as ‘unread’. This was the first app by the developers. We appreciate their effort and the concept is clicking right from the start; but the execution is not up to the mark. We hope for most of the issues to be sorted out in the next updates. And for $0.99, just bag the deal and go home!