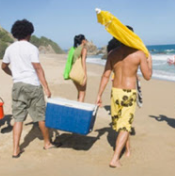 Social Networking is now an integral part of the society with all your friends and family members a part of it. You share everything with everyone there and that’s the whole concept around. But sometimes you don’t want the whole circle to be a part of an event and rather some selected ones only like some images of a party. Then it becomes difficult as you can neither resist nor post it. Then, you have to finally opt for other options such as mailing them to friends, but it is obviously not what you wanted. So, instead of going for the second option, go for a third one, Bonfyre! We are talking about the new Android app, Bonfyre. If you are in touch with some iOS apps as well, then you might remember it’s the same app as featured in the App Store. Bonfyre is not just a photo sharing app rather a combination of the former with “private social networking”. You must be imagining what kind of social networking it is if it’s private? Then, it’s the solution of the problem we discussed above. The idea of the app is such that it enables you to share your photos with those who you want to share with. No extras are included in the list. Moreover, you can chat with the group members and comment on the images as well. It is like a mini social network wrapped around your friends and you.

When you open the app, it requires you to sign-up with an account. As you are done, you are good to create your first bonfyre. A bonfyre is like a group which you create, where you will add images and invite friends for sharing. The whole concept is very original and creative. You can create as many bonfyres as you want. You can add images from Facebook, your photo gallery or capture a new one. All your images are kept as your “memories” in the memories section. There you can chat with the group members and comment on the photos. It creates a lot more than just a photo album and adds a different aroma to the atmosphere. You can also check out how many people are going to a bonfyre. There is a “Me” section also where you can check out your friends, groups and all your uploaded images.

We don’t know whether your memories are beautiful or not, but the app is. The interface is neatly designed with a new touch, but not yet complex. With smooth navigation, it’s always easy to check out the updates. We really liked the memories section, where images are stacked to one another without any gaps and it was nice, but still differentiable. The app is available for free in the Play Store and just one more excuse to download this app to your device. On the whole, we liked the app so much that it’s permanently in there from now. There are all positives till now. However, we would like to see some more social networking tools in the future updates.