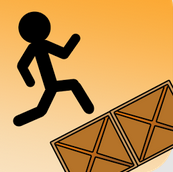 Imagine yourself running down the road clueless and breathless. You are just pouring down your full efforts to move your legs even when the blood seems to be short of supply to them. Then the road itself is a puzzle with lots of obstacles in between. So you have to avoid all of them with swift and fast movements and maintain your pace as well. You can call it a race or you can just keep on going without any particular reason. I don’t know how you feel in real life, but for a game it’s perfect. There have been many games based on a similar concept such as Subway Surfers or Temple Run, though there was a monster running back at you. Let’s get back to this one and see how it is unique and find its features.

It was a 16 year old boy who made a Facebook app that is still turning 6 million users crazy every month. The game is called Stick Run and today we will be discussing about its Android version called Stick Run Mobile that has been developed by Nekki GmbH. The app is compatible with all the devices running Android 1.5 and later version of the OS. The gameplay is about you running across a platform and there are many obstacles on your way. You just can’t back or else the game is over. The obstacles may range between panes of glass, rotating saw blades, crates, etc. So running straight into them will get you killed. You’ll have to jump past them making sure that the timing of the jump is right so that you don’t ram into another hurdle placed just next to the previous one. You also have to keep collecting more and more coins while running which later might be exchanged for some customizations.

On the name of customizations, there are a lot of features and personal attributes of your player. You can change his eyes, head, mouth, hands, etc. You can also change the background.  The graphics are clean i.e. the fillers are kept to minimum and you can concentrate on your game easily. The characterization is perfect. The running character is very brilliantly created. Most of the times, the running player is somewhat shown serious and nothing is devoted to his personality. This time he’s funky and cool. High Five! The game can be played both individually as well as multi-player. Playing with your friends is just an amazing experience and a local competition raises the bar further. Then the achievements table is just another addition to the unlimited stuff. The app is a perfect adaptation of its Facebook version and a price of $0.99 is far more perfect than we expected. However there is just one little problem that it crashes a lot and that’s something the developers need to fix for the next updates.