Flappy and Chum – A New Addiction to Get Used To 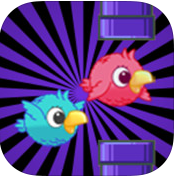 For all the iTunes users out there, Flappy is the latest flavour of the season. If you haven’t heard of the bird, don’t go to a bird sanctuary or to the jungles of Amazon to see them fly. Just go to your iTunes store and there you’ll find it. But wait! The bird is no more at its place and though it had millions of visitors every day, the developer thinks that “it’s getting too much”. I am talking about the iOS app called Flappy Bird that is no more available for download on the iTunes store. Everyone was confused as the app was suddenly a big success but the developer was not happy with the highly addictive gameplay and heavy media attention he was getting, at least that’s what I heard. But its shoes must be filled by someone else, right? So while there have been numerous such apps in the App Store, we have one that stands above the crowd. Let’s check it out! I am talking about the iOS app called Flappy and Chum that has been developed by Ali Uddin. The app is compatible with iPhone, iPod touch and iPad and requires iOS 5.0 or any later version of the OS. The app has also been optimized for iPhone 5.

Flappy and Chum has a slight different gameplay than what Flappy Bird had on offer. The only limitation of Flappy Bird was that it used to become boring after some time. The graphics and gameplay were simple which added to the immediate success of the game, but after some time it was a tasteless journey. This game is multiplayer and two players can play at a time. There are two buttons on the bottom of the screen and you have to tap them to flap your bird. There are two pipes, one upside down, after regular intervals and you have to pass through the gap in between them. The player who hits first loses the game. But the developer has again implemented a nice thought here. Instead of finishing the game right there, he has chosen to let the other player go on until his bird hits as well. So there’s a sense of competition which keeps the game interesting as well as your own individual play once the other player goes down. This game is quite a challenge to clear. I’ve tried so many times and I can hardly go beyond the fifth set of pipes. This one is a difficult game to master but make sure you don’t get frustrated very soon. By the way, you’ll have a partner to cheer you up!

The graphics of the game are not much high-end but just average. I think the developer has chosen to stick to the original idea of keeping the game as simple as possible because that’s what the users liked the most.

Overall, I think Flappy and Chum is very different from what the original was and is surely worth your download.

The app is available for free in the App Store. So don’t forget to check it out!