Pirates Gulf Game; Become the Number One Pirate of the Gulf 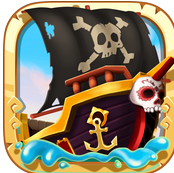 The time to identify the most outstanding pirate of the entire surrounding Gulf and its surroundings (Caribbean and other interconnected seas) is here! This total experience is brought to ardent game players who are ready to test their skills on the fast-paced and action-based Pirates Gulf game. To make the experience much thrilling, the game is all about competition! The player is not alone; there are other outstanding players all over the world who are also engaging in the game. The ultimate winner with the greatest score takes the number one spot on the Leaderboard. This calls for consistent and exceedingly high performance for one to stay on top. It is time to get started! The high quality formation of this fascinating game clearly explains its capabilities in delivering great results. Having been designed, created and introduced to the gaming industry on 6th June 2016 by Salem AlEnzi, Pirate Gulf app has had quite a good reception from game players. This is clearly indicated by the positive reviews that translate to an overall 4+ rating.

When it comes to the compatible device for this great app, it actually operates on those which have displayed great capabilities both in performance and efficiency. Such devices performing well with Pirates Gulf include iPod Touch, iPad and iPhone. Meanwhile, the required operating system should be iOS 8.0 or any latest version available. Getting into the Game

How about carrying out different expeditions on the seas and attacking different enemies that come on the way? This sounds quite fascinating! Having been prepared with great powerups and sailing with upgraded ships clearly implies that the total experience is amazing. Apparently, Pirates Gulf game comes out as one of the interesting and easy game to play.

Each time an enemy appears from far, the player needs to quickly use the navigation buttons to rotate the wheels towards the direction where the enemy is located. After making a precise aim on the enemy’s ship, what should follow is to initiate attacks on target. Apparently, one can apply the use of powerups which are known to stimulate the entire performance and accelerates the ability of quickly sinking the opponent’s ship. Once the player has conquered the opponent, it is now the greatest chance to take away his booty, a sign of being in total full control. All that awaits one is to be ranked the top pirate once one conquers all the opponents completely.

Here are some unique features for the Pirates Gulf app game:

The total experience gained at the sea while fighting different enemies is quite fascinating. It is critical to ensure that the ship is well upgraded and contain powerups which tend to boost in attacking opponents.

The first sight of the entire cast involved in the pirates of Gulf gives an amazing expression on the unique artistic design applied to develop them. From the start of the expedition up to the battle field, the entire art is well- displayed and this gives the user a fun-filled moment indeed! The ability expressed by these powerups is exceedingly high enough to sink the ship of the opponent. They are actually available in different varieties that one can apply them when launching different attacks. They are perfect stimulators!

How about listening to a great and high quality music that has been integrated within the game? This not only makes the game interesting but also keeps the player entertained throughout the game. Interestingly, the soundtracks tend to align perfectly well with the game.

The game has adopted the action-packed approach where the total game exposure requires the player to remain vigilant in order to spot any intruding enemy. The game involves the use of rotation wheels in order to aim and fire at enemies and this sends them to the Davy Jones locker.

Check below for the Pros and Cons evident in the Pirates Gulf app game:

· A ground for competition available

· Infrequencies in the output experienced

Getting a completely thrilling game that takes its setup in the seas gives the player a totally new experience! Pirates Gulf is a top rated game that has proven to possess high quality performance, classic design and giving unstoppable experience to players. This makes it an absolute choice for anyone willing to take adventures on the seas. Download it now on App Store and get into the mission proving self worth as the best pirate of Gulf!