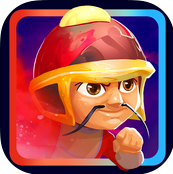 Kheshig :Launch Attacks on Opponent and Conquer The World

A game that introduces the player to action-packed mission that comes with great fun is absolutely worth trying! This is the exact experience that is awaiting the ardent game players from the newly released Kheshig game. This fantastic game which is based on Kheshig who acted as bodyguards in the Mongol Empire and were trained to offer protection particularly to different rulers such as Genghis Khan together with his wife Börte. They also acted as imperial guards for emperors and the royalty family.

As a player of this fantastic game, one is assigned a mission to undertake; that is to conquer the world using the available knight warriors. The game comes with a challenging experience where the player is required to guard the treasure and keep away the enemies by bombing them. In relation to formation, Kheshig app game has integrated colorfully-designed animations and high quality graphics that that is well tailored historic nature of the Mongolian Empire. So far, it has maintained a 5-star rating with reviewers applauding its high performance, numerous levels of play and challenging experience! Getting into the Kheshig app game

In this version 1.0 of the game, the player will discover that there are two alternatives offered for the gameplay. First, one can play against different friends while using the online platform whereas the second option is to play against the compatible device that one is using. Meanwhile, there are different types of warriors that the player can choose from to resume their character roles and skills. These include Mayan Warrior, Mongolian Warrior, Cowboy Warrior, Egypt Warrior and Ninja Warrior.

How to Play the Kheshig app game

This is actually one of the easiest games to play; however, it requires the player to be attentive, skillful and accurate when making different moves in order to conquer the enemy. The first action in the game involves the player and the opponent making different moves in turns as each party gets prepared to go and acquire the treasure. The game is quite flexible thus the player can move the warriors on different directions which can either be up or down and left or right while on the board.

Meanwhile, one should ensure that the paths followed by the warriors are free from rocks to prevent them from getting stuck. As the player’s warriors meet with the opponent’s warrior, an attack is launched by both sides where the winner will be determined in relation to the high amount of dice gained. Another thing? The player is crowned the winner after getting the enemy’s treasure and loses the game by getting defeated by the enemy’s bomb. This mind-blowing game has integrated a strong and high quality platform to ensure that its users get the best gaming experience. Thus, it can efficiently perform greatly on devices that can support it well. Such devices include iPod Touch, iPhone and iPad. Besides, the user needs to possess iOS 6.0 or any new version of operating system to efficiently play the game.

Here are the exceptional features that are notable in this app:

Different worlds of warriors to choose from

Apparently, the player will discover that each category of knight warriors that have been incorporated in this game comes with different skills. Some of the worlds of warriors that one will come across include Ninja Warrior, Egypt Warrior, Arctic Warrior, Mayan Warrior, Mongolian Warrior and Cowboy Warrior. The player will be required to apply great skills in order to ultimately conquer the enemy’s warriors.

This amazing game comes with two modes of play that the player can choose from. These include the multiplayer mode and the single player mode. Under the multiplayer, one can invite different friends and engage in playing online together. On the other hand, the single player will involve an individual playing and competing with the device being used. Interestingly, both modes bring great experience to the player! Hundreds of levels to play

This is one of the incredible games that come with numerous levels that the player can try out. The initial levels are quite simple to complete and they tend to contain less warriors. As the player graduates, one will discover that it becomes a bit challenging to outwit the enemy’s warriors. Thus, it is for the player to boost the skills and make more accurate movements in order to become the ultimate winner. Besides, it is also advisable to create a strategic defense against opponents’ warriors!

Apparently, each, movement and attack launched by the player’s warriors and the opponents’ warriors is able to make them earn points. Thus, it is crucial for the player to launch aggressive attacks in order to eventually record the highest dice. Actually, the side which records the highest number of dice probably becomes the conqueror.

Here are the pros and Cons that have been identified in this amazing Kheshig app game:

· Fantastic user interface makes it easy to play the game

· The graphics and animations are highly designed

· Two modes of play that one can conveniently choose

· Lots of amazing levels worth trying

· Some levels are quite challenging for beginners

With the current 5-star rating from honest reviewers, this is a clear indication of how super awesome this Kheshig app game is! It has integrated a unique storyline that comes with fantastic features and animations that are well-tailored to the ancient Mongol Empire. It has also integrated numerous levels of play, great modes of play and well-designed graphics to give the user unstoppable experience. This is truly a great time killer for any ardent game play. It is absolutely highly recommended. Get it today for free at App Store and vanquish the world with knight warriors!