ATTACK YOUR FRIENDS- A FRIENDLY BATTLE! 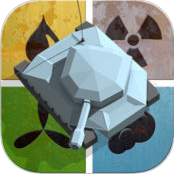 Have you ever heard of a game where you turn your friends into enemies? Probably, you don’t have! But today I’ll show you an app which is a great way to stay in touch with your friends. It’s called ‘Attack your friends’. It has been developed by Play By Turns Ltd. under the Games category. The app has been updated on March 12, 2017. It requires iOS 6.0 or any later versions of the Operating System and is compatible with iPhone, iPad and iPod touch.

The game has beautiful graphics and sound effects. It’s an easy to use app with simple controls. This latest version of the app has fixed bugs and minor improvements. It can be accessed anywhere at any time in your mobile devices. It is a super-addictive game play, which refreshes your mind and kills your time.

It’s a great turn based game of world domination to play with your friends and other players without having to be online at the same time. The main objective of the game is to conquer every country located on the map. The game is available in multiplayer mode where more than 2 players can play with each other and compete with them. You can play with your friends and random players. You can chat and form alliances with your opponents and discuss anything regarding the gameplay. The idea is to re-create a board game multiplayer experience for the mobile asynchronous game play. If you have played RISK as a board game know how intense the atmosphere can be struggling to get control of the world map. However, the game is easy to learn but difficult to master. So overall, it’s a great strategic and diplomatic challenge for the more advanced risk player! As it’s a turn based gameplay, you have to play according to your turn and wait for the next player to complete the turn. The game uses push messages to inform you whether it’s your turn or not and allows you to play at your own pace. You have to attack on your friend by using your mind and have to defend yourself. You can play in any climate whether, Tropical, Desert or Arctic Climate. The game uses cards, dice and other traditional board game items. In addition to this, the game allows players to collect troop and win defense cards to increase troops and gain an edge. It’s the only risk game that turns your friends into enemies. Actually, they are not enemies, but during the gameplay, they become your enemies. If you’re a casual player then you’ll not find any problem in playing this game, it’s an easy and straightforward risk gameplay for you. There are game statistics to keep track of your results versus the other players. If you’ll score high, then the scores will be displayed on the Leaderboard.

Download the app now from the iTunes Store and Conquer the world now!