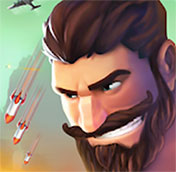 It is always noted that some people adore playing new games every day and search eagerly for new latest ones. And it’s nice for a good change in their life. Isn’t it? So, let’s talk about an app which is gaining familiarity in the market and its wholly fresh. This new amazing app is none other than the Loaded Shooter by Chia Apps which is like Scifi game.

The passionate players can get ready for a Sci fi game filled with action.In this game, the zeal players will have to have quick reflexes, intense strategizing skills, and the will to keep moving forward.Generally there are ten levels in this game. In this Loaded Shooter game, players would discover their potential to battle the cyborgs, punks with hover bikes, and soldiers with rifles, shooting down helicopters a much more. The players could stay alert and never allow your guard down. Moreover the players could be part of this action sci fi and come out of it victorious.Right from early of the first level, you might think it’s facile, but as you go on your skill and courage would be tested.

This is a classic action sci fi game on the Android &iOSplatform. The craze for games is highly growing among people. There are many interesting and brain trickling games available on play store and app store’s but this game is adored and played by many people, it has also gained a lot of ardent fans. This game is highly addictive for all age groups, with interesting features. Finally in the past few years, it’s become harder for me to find developers who continue to release quality games that I will purchase without hesitation. Fortunately, Loaded Shooter by Chia Apps is one of those popular release titles which are assuaged from all corners of users.I must admit that they’re rather addictive and I added that to my collection.