RoboFail – A Fantastic Shooting Game to Wake You Up 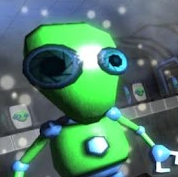 RoboFail – A Fantastic Shooting Game to Wake You Up

Having stressed out days in office? Want to get back at someone for doing you wrong? Unable to get boxing & punching thoughts out of your head? This is the time to get addicted to RoboFail as it gives you a sense of satisfaction of having to shoot at all the defective  robots that are hell bent on entering the production house. The whole scenario is that of a robot factory and due to malfunctioning equipment faulty robots are being produced that needs to be weeded out by the defective robot annihilation team, which is you. There are totally two conveyor belts. One carries the raw material into machine, from right to left, in the backdrop. The other one transports the finished robots from the machine to the production line from left to right. The player gets to aim and shoot at the red robots on the second conveyer belt, while leaving out the good robots that are green in color. Shooting a red robot and keeping the green bots intact, will yield you positive points while shooting a green robot and not shooting a red robot will yield you negative points. The overall aim of the game is to reach the score level set by the smart app. As you complete the current level, you graduate to playing higher levels where the difficulty level too increases.

The developers Code Noctis must have been hard core gamers to truly conceive this concept that keeps you hooked to the game. It is amazing considering that this is their first game from Unity community. This game is installable on Android 2.2 and above for a mere amount of INR 105.38. This game is super entertaining and is extremely suitable for times like travel or in-between waiting. It doesn’t take too much of your disk space and is light weight. It could have contained more components to the game like new tactics and weapons being introduced at different levels, but since this is version 1.0.0, lack of completeness can be excused. No matter what the IQ of robots is, a robot can never replace a human being and it surely is a great feeling doing the role play of a robot destroyer.

The graphics of the app are clean and there is clarity in the activity happening. When the lasers are deployed we can see the robots getting sliced, when the catapult is deployed, the robots are knocked off and the like. The bigger screen you have got, the better the resolution. With RoboFail it is human-success and all times are ‘Happy Times’.