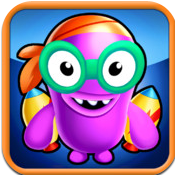 Today I’m going to again repeat one of those old stories where a child somehow lands into some other unknown world and then left alone there. But he is desperate to come back to his home and therefore gives his full effort to rescue himself. The store is almost the same in the case we’re going to discuss next as well. Now, the boy is an alien named Jinx who has crashed onto an unknown planet. Now, he’s got to get back to his star ship before his boss. He takes his jetpack and flies off in search of his ship. Now, it’s your job to guide him to his destiny. The game we are talking about is Jetpack Jinx that has been developed by Bubblegum Interactive. The app is compatible with iPhone, iPod touch and iPad and requires iOS 4.3 or later version. The app has also been optimized for iPhone 5. It is a climb game but not exactly like what you’d be expecting. Instead of jumping up the platforms or climbing up the walls, you will be launching Jinx and moving up the sky.

As soon as you launch Jinx, the fuel gets used up within the first few seconds and to sustain the flight, you need to continuously feed yourself with various items such as hearts, gems, etc. But while moving around for more and more of them, you need to be careful not to hit any of those animals or birds on your way or any kind of hurdles. Otherwise, you may soon be restarting from the bottom of the launch position. The game has many different locations available such as Jungle and corresponding background graphics. There are many different upgrades available to turn your small little alien into a powerful beast with better sustainability and powers. You may also earn some power ups during the game such as protection cover or fast speed. You are continuously rewarded for your performance.

The most lovable part of the game is its graphics. The cartoon themed graphics are very beautiful and rich with natural beauty. The UI is also very intuitive. The controls of the app are very easy. Just tilt your device in the direction you want to turn the alien to. The app is available for free in the App Store. Maybe it’s one of the best free apps available in the store right now. The app is though universal but best played on iPad due to its larger screen with more space for all the items. There are many achievements to unlock as well and rewards to win. But we do feel that the way the game has been designed, there could be some more additions or modifications to the game as well. Still it was a very good overall experience and we recommend this app to everyone. It is fun, entertaining and puzzling sometimes.

Cons: gameplay could have been better.