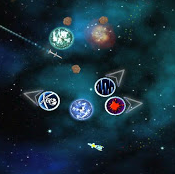 Brain games have a natural capacity of keeping people hooked for hours and these games are loved by people who want some challenging activity to pass their idle time. Quick action and smart thinking are the major requirements of playing the puzzle games and the Galactic from ANDRONOVA MOBILE provide you just that. The game is a puzzle game which requires your brain being active throughout the play time. This is a space physics puzzle game to lots of attraction and attention grabbing sequence and the graphics is really cool and exciting. The Galactic puzzle game requires you to think and react quickly and there are 60 levels to cover. Two modes are available in the game to keep you hooked and the puzzle toughness increases with each level. In the skill mode you will be introduced to different layers of the space and would have to complete the layers successfully to move to the higher stage. The sandbox mode is full of excitement with the scope to become a bigger object. You can start your journey as a meteor then convert to a planet, then to star and at last to a black hole and become a nightmare for your opponents. There are quests, bonus levels, achievements and more to unlock throughout the game and this would keep you asking for more.  You can avail the game at as little as $0.99. Summary: The Galactic is a puzzle game with space physics involved in the mechanism. The space puzzles are interesting. The dual level options would keep you engaged with the game for a long period of time. The game requires low space and it is a low cost game for Android devices.