Rails : Track the Footsteps and Join the Missing Legs 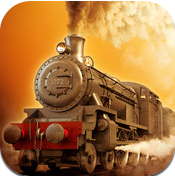 Trains are nowadays one of the biggest and cheapest sources of transportation. They are comfortable as well as affordable. If you are traveling within a country, then there may not be any airport but any two areas are connected by at least one train. But if you’ve ever carefully studied the route followed by a train, then there are so many tracks with triple the no. of trains running that you’re obviously to be confused. Just think of a railway officer who has the job to manage all the trains coming to and leaving the station so that the scheduled time table is followed. Sounds difficult; but it is interesting as well. The officer is on leave for a day; so would you like to take his position for now? I am talking about the new iOS app, Rails that has been developed by Belight Software. The app is compatible with iPad only and requires iOS 3.2 or later version of the OS installed in your device. The goal is clear but it’s still confusing on how to keep them all on track and that too without delay. Well, that’s the game and I’m confirming it to you right now that the game is very difficult. Only those who can make things interesting should follow. The gameplay of the game is what makes it a jewel in a mine. It’s difficult of course, but very interesting. Once you’re hooked to it, I bet if you leave it before at least an hour. In game, you have to draw new tracks so that each train reaches its station, the one with the same color. There are some interesting elements as Railroad switches and Traffic signals. While switches change the track and direction of a train, traffic signals can be used to avoid collisions. There are three different seasons: summer, winter and spring. There are total 60 levels of gameplay with 30 achievements to unlock. But what confuses you even further is that there are 12 different trains with different features. While some can’t be stopped like the crazy train, others have time bomb as well. It’s a perfect combination of skill, logic and timing. If you miss out on any one of them, you’re done. The graphics of the app are mesmerizing and so are the sound effects. This app certainly stands out in every department. The tag price of $4.99 is justified with the brilliant content offered but a downside as well for the buyers. However, the game is currently available on a 50% discount for $2.99 and it’s really a very good deal. I would recommend this app to everyone. You’re sure to be frustrated in the beginning and there is a tutorial as well to help you learn the skills faster. But continue to find new ways and you’re sure to taste the victory.