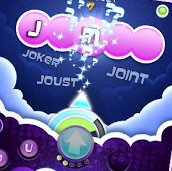 Playing scrabble or crossword puzzle seems to be a thing of the past. To reinforce one’s hold over words and satiate the hunger for world play, Wordsplosion is the game to indulge. In the app, the player has to guess a five letter English word in the least amount of time. The game permits five guesses and if the bell tolls without a correct answer, the explosion happens. Dexterity and a steady mind are the requirements to play this game. The winner earns free letters to the succeeding games. A player can compete against other friends with Gamecentre option. The highest scorer gets his/her name mentioned in the winners scroll.

The game app has an enormous stock of five letter words. It is least likely that a word doesn’t feature in its dictionary. The game keeps on continuing till the player runs out of time, and once the moment comes, there is a BOOM!! This gives the game its name: Wordsplosion. Summary: Wordsplosion version 1.0.8 is a 5 star rated application which is a thrilling crossword game sure to be enjoyed by a vocabulary lover. The app is of 22MB is available free of cost and can be installed in Android Phone 2.2 and up.

Good: A crossword game for mobile user which enormously strengthen word power of five letter words. The app requires a minimum Android version of 2.2 and above which is available in most phones. Hence, the game can be accessed by a large number of users.

Bad: The app is limited only to five letter words. This can dramatically reduce the popularity of the app, but with just a bit of modification, the game can itself be a winner.