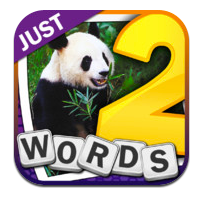 David L. Hoyt – the name is legendary enough to kick start your brains and begin expecting an artillery of puzzles being thrown at them. He can be considered the “Einstein” of puzzling world. Not that they are the most difficult, but they are always the most interesting and entertaining. He has a whole generation of kids and adults following him and represent him 750 newspapers along the entire nation of USA. But as we know, no matter how much one has drink, it’s only the appetite of the drunker that decides which one is his last bottle. David has given so many brilliant games in the past such as Word Winder, Jumble, etc. and here he adds another one to the list. However this can’t be regarded as a classic as his other works. Find out more below the space.

So here we have a brand new iOS app called Just 2 Words developed by Adveractive and engineered by David himself. The app is compatible with iPhone, iPod touch and iPad and requires iOS 5.1 or any later version of the OS. The app has also been optimized for iPhone 5. It has just been released on 18th July and this fresh stuff out of the Pandora’s Box has a lot of potential to score big.

The game is pretty simple yet addictive. Each game consists of two pictures shown adjacent to each other. Then there are two blank word spaces in the bottom of the screen. So your job is to carefully look at both the images and extract out a word that matches with the number of letters available in the blanks. Also, to strengthen your thought that you have worked out the right words, check if there is any connection between the two words and if they pair up to build something familiar to you. If they do, then go ahead and gear up for the next level.

As soon as you find the words, the more coins you bag up. You can use these coins to get hints from David himself (though it’s just an image of David popping out with the hint). The hint is not another picture but a clue in written form either describing the word or giving you an imaginary picture of its structure, whatever may be the case. You may also use in-app purchases to purchase those coins in exchange for real cash. The different in-app purchase offers are $0.99 for 260 coins, $1.99 for 600 coins up to $19.99 for 8000 coins.

The UI of the app is very intuitive. You won’t be distracted at anytime away from the main question. The graphics are sharp and brilliant. The whole combination of images and puzzle is just perfect to be suited up. I think these are the kinds of games that keep the brand name of David L. Hoyt alive and over the top.

The app is available for free in the App Store. So what are you waiting for? Get up and start quizzing!