Bowl with Me – Exciting as HELL ! 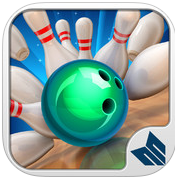 If you love bowling and want to experience the ultimate experience of a bowling club at the experience, then keep reading. Bowling is not a game that requires vigorous exercise or asks you to wake up at 5 in the morning and take a long walk. But yes, it requires a lot of concentration and can be regarded as a peaceful game, though the sound of falling pins always brings a lot of cheer on your face. That is why it is enjoyed by everyone and is the most played game by non-players. People just love to take a break from their busy schedules and meet with friends over a bowl game. Though nothing can match the excitement and fun of a bowling club, still you can have a lot of fun at your home if you have the right app installed in your iPhone. Here we are talking about the upcoming iOS app called Bowl With Me. It has been developed by Megu Games and Bitwise Design. The app is compatible with iPhone, iPod touch and iPad.

Bowl With Me is best in every department whether they are the amazing graphics, addictive gameplay or the user friendly UI. You can never get bored of such a game. There are many games that I have played previously and the most important ingredient that they missed was the multiplayer option. No matter how bad or good a player you are, regardless of the game, you’ll finally get bored of playing alone. The developers have cashed this option in the best manner by introducing two modes of solo and team. In the solo mode, you can go individually against your friend or any random player. In the team mode, a team of two goes against the other. Graphics are very crisp, sharp and bright and thanks to the realistic approach of the developers that you can experience the same thrill of a bowling court. There are bowls available with different weights, after all that’s what matters when you’re playing a bowling match. So the developers have made sure that you feel it the same way. You will feel the heaviness in both the spin and power but you must win enough matches to unlock them first. To win these multiplayer options, first you must practice in the solo competition and that’s how you combine all those different elements into one. In the GameCentre, you can unlock achievements and rank yourself against other players as well. Don’t forget to post your scores on Facebook and invite your friends to try some hands on.

The app is available for free in the App Store. It’s about to release in a few hours from now on March 6th. The developers have had some successful apps in the past and this one is just an extension to the list. Let’s go bowling!