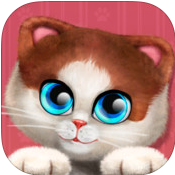 Puzzle games are the best possible way to keep you busy for hours. Summer vacations are on and you’re not going anywhere while all your friends are? Well, that’s one of the times where boredom can take your life slowly eating your brain. You’ll be crawling in your skin, just like Linkin Park said and sooner or later, you’ll be searching for something that can keep you busy. So why look here and there when that ‘thing’ is right in your pocket. Go explore it! I am talking about your iPhone and what’s better than exploring the App Store! There’s an app called Let The Cat In that has been developed by Eforb Games. The app is compatible with iPhone, iPod touch and iPad and requires iOS 7.0 or any any later version of the OS. This app has also been optimized for iPhone 5.

It was a small mistake to go out of the house by the kitten but now she’s having tough times to come back. So your job is to open the gate for her. But it’s not the key that you have to find, but you have to pull the lever so that the gate can be opened up. Now, the developers have decided to go indirect and to pull the lever attached to the gate, you’ll have to solve the mystery behind. It’s not a puzzle of numbers but you have to establish a link between the members placed in a physical world. So there you have pulleys, flat boards, wheels, etc which are all available in different numbers and you have to place them in a way so that a ball can pass through them and hit the lever. This game is different from others in the sense that there are far too many elements especially at the later stages of the game. The whole space is empty at the start of each level and designing the entire pattern of elements seems like designing a new structure out of nothing. The room is filled with colourful walls and paintings. To twinkle it more, there are some stars that you have to collect in each level. Actually, that’s how the combination becomes more difficult to crack because you have to predetermine the situation at each step and hope that the ball gets all the stars and manages to hit the lever too. So it’s a hit-and-trial method to follow again and again. The graphics are great not only because the room looks beautiful but also because they’ve managed to do it in each and every level in a different way. There are 120 levels in total out of which 80 are locked, so you can imagine how hard it is to give each of them a unique look.