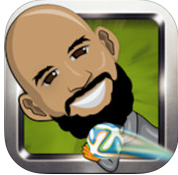 I remember the best goalkeeper I’ve seen in my life was Kahn from Germany. Watching him save goals diving from one post to another was just breathtaking. There was pure dedication and sheer power in his every move and his defence was stronger than the best attack in his time. Remember, the defence needs to be stronger than the attack of the opponent or it will be of no use. But there are many more elements that come into play when you’re into the shoes of a goalkeeper. You need to be quick to react, the coordination of your mind and body should be perfect and you should be able to read the mind of the opponent and jump the right way. I know there are many things to take care of but there’s only one goalkeeper in a team of eleven. So you can’t escape the responsibility of the title. Let’s start practicing then! I am talking about the new iOS app called American Goalie 2014 that has been developed by Chewingapps Ltd. The app is compatible with iPhone, iPod touch and iPad and requires iOS 5.0 or any later version of the OS. This app has also been optimized for iPhone 5. This is a very addicting game. You are a goalkeeper and your only aim is to save the ball from going past you into the net. Your game continues as long as you’re saving the goals. The very first time ball breaches your territory and your game’s over. The controls are very simple. You have to swipe your finger to slide the goalkeeper in the direction of the ball. But isn’t it very easy for a game as neither is there any tension of the crowd in the air nor are you physically tired saving one after another goal? So there should be a new spice in the recipe and the developer has added just the right one. The twist is that apart from the round ball, there are yellow obstacles as well flying towards you. If you dive to save these obstacles from entering the goal, your game will be over and you have to avoid them. So just before the shot, you don’t know which one’s coming your way and therefore your strategy is just a blank piece of paper. You have to decide right at the moment of the strike which way you’ll jump. It really spices up the challenging level of the game.

The graphics of the game are good and perfect for a simple yet addicting gameplay. You can challenge your friends and family members on Game Center and find out which one’s better. Moreover, you can share your score on Facebook as well. So there’s a lot to play and talk about with your friends. The app is available for free in the App Store. Make sure you grab your piece of cake today!