O’ Fish! – My Kids Are ADDICTED To This Game! 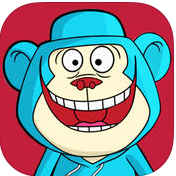 I bought my two children an ipad for Christmas last year and downloaded some free games. One of them was O’ Fish! From then on all I heard was the fun music that this app plays, I was humming it not even knowing what it was from. They were absolutely addicted. All I heard was about who could fish further or get more coins and saving up coins for new things in the game. They love it! They were spending most of their time on their ipad playing O’ Fish! So I of course was curious and tried playing it myself. The first thing I noticed was the very cute monkey animation with his fishing pole right off the bat. My children have him named and now we all speak f him fondly. Then of course the catchy music that plays, I can’t get it out of my head. I thought it would be very simple but once I tried it I found it to be quite difficult but still easy to get the hang of. Soon enough I was saving up coins to buy new water or line or luers. There seem to always be new objectives or upgrades to keep me coming back to the game. It never gets to be repetitive or boring. I’m playing it way too much! I love how the game requires minimal touching, it’s all done by tilting your device. I’ve gotten my husband and a few of my coworkers to start playing it too, we all share our high scores and compete for the best. It requires the perfect amount of attention paid to it. Enough that I can mindlessly play while watching a movie but also feel like I’m challenged. It’s perfect for children to play and have fun with but not too childish for us adults! The gameplay is definitely very unique and different than any other game I’ve seen while still maintaining a sense of familiarity that you’ll have if you’ve played similar games. I have a couple games on my iphone and my children have many on their ipad, and this is agreeably the favorite game of the household. At most points in the day you’ll see one of us playing it together. It’s brought me closer to my children. Usually I see them playing a game and I’ll try it and find it simple or boring. Now we have something that we all like to do that we can talk about and that talking leads to more talking about other things. I now know that when they’re on their ipad, they are playing a safe fun game that I’m familiar with instead of doing things on the internet that I could never figure out. I encourage any parent to get O’ Fish! for their children or themselves! It’s very fun and best of all FREE!!! I love anything that’s free but a lot of the free games in the app store are boring or cheesy. Not O’ Fish! It’s the perfect game if you want something fun, with great graphics, and keeps you coming back over and over.