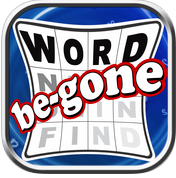 Words Be Gone is a new twist on the word-finding puzzle game. Unlike the traditional cross word-puzzle games or Scrabble based games, Words Be Gone presents the player with a grid filled with letters, the goal is to find the words in the letter grid and then swipe them to make them disappear. The words can be swiped from any direction and when the board is cleared the puzzle is solved. That sounds easy, but unless the right words are chosen to clear all of the letters the puzzle can’t be solved. That’s the element that makes this game absolutely addicting. The game includes puzzles designed by David Hoyt and Colin Morgan. Hoyt writes puzzles for Jumble, USA Today’s Word Winder and Boggle Brain Busters. Morgan is a game inventor and author. Starting off on the easiest level I found this game to be enormously challenging and entertaining. After downloading it on my I-phone and watching the short tutorial, I started to play the game. The game presents the player with a 4 by 4 grid containing letters that can be combined in any direction to make words. One of the really fun parts of this game is that it offers two different styles of puzzle. The first is simply called “classic,” here the player swipes words vertically, horizontally, or diagonally. The second style, is called “twist,” here the game gets much more creative by allowing the words to be twisted between adjacent rows and columns. There is no other way I can come up with of describing this masterful twist — you simply need to download it and check it out.

The creativity of this game is really what captured my attention. As I progressed further into the game and cleared more and more boards, it continued to throw new twists and special rules at me. This makes the game addicting to say the least, I ended up playing it for over two hours right after I downloaded it and only quit because I had to get some work done. As the letters are swiped to erase the words, they appear in a word list on the right side of the screen. There are also tabs on the screen for hints, which I ended up using, and tab containing the rules of the game. Upon first glance I thought this game would be rather simple, but in fact, I ended up spending over 30 minutes on the first puzzle. The challenge is not just finding words, but finding the right words to clear the entire grid. This is what makes Word Be Gone the most challenging word game that I’ve played.

As the game progressed, the puzzles became more and more difficult. Thankfully, the game provided me with 10 free hints and offers additional hints through an in-app purchase. This is one of the most enjoyable games I’ve come across in along time. My wife, who is an avid Words with Friends player, fell in love with it and hasn’t put her phone down. The game is available for as a free download on the App store.