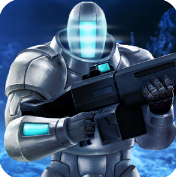 Are you looking for a fresh, new multiplayer first-person shooter? May be there are a lot of shooting games, but you’re not finding the right one! Because the one you’re searching for is here! It’s called Cybersphere, a free top-down shooter in a futuristic setting. It’s a cross platform LAN Multiplayer game in which you have to defend yourself and fight with your enemies. Cybersphere is a 3D twin stick shooter in sci-fi setting. It’s a first person shooter game loaded with frantic action and lots of firepower.

Cybersphere has been developed by Leonid B. It’s compatible with all the Android Smartphones running the latest version of the Operating System. This game is a LAN multiplayer, so up to 6 players can fight together. There are two modes to play the game: PVE (Player versus Environment) and PVP (Player versus Player). In PVE, you can join forces and increase your firepower in virtual flight. Whereas in PVP game mode, you can find out who’s the best pilot.

To play Cybersphere, you need to download the application and install it to your Android device. You can then begin and choose the mode in which you want to play. You can fight alone or join forces with other pilots in a new co-op multiplayer mode. Let me tell you about the main objective of the game! As it’s an exciting top-down Sci fi 3D shooter game, your main role as a player is to control an ultra modern battle drone and fight superior enemy forces. You have to defend yourself and destroy hordes of enemy battle robots.

Cybersphere offers more than 20 deadly tools to destroy your enemy and offers a great selection of weapons and support drones. There will be a variety of obstacles in your path and many opponents such as robots, aliens, cyborgs, and dangerous bosses in your journey. But you have to protect your base and maneuver to hide from enemy fire. You can shoot from rocket launchers, turrets, lasers, and other weapons that can be installed on your drone. Don’t lose hope and keep fighting in difficult conditions also, destroy enemy units and defeat huge bosses.

There are a lot of character types and various drone models you can choose from! You can use your deadly and diverse arsenal of firearms, missiles, energy weapons as well as support battle drones for the destruction of the enemy.

The game offers beautiful 3D graphics and sound effects. They are amazing and will make you believe that this game is a reality. It has easy and simple controls and there is a top-down view also. You can manage it intuitively using on-screen controls or gamepad.

Overall, Cybersphere is one of the most interesting action games, offering a non-stop action. It will not let you relax for even a minute.The game is available for free in the Google Play Store. Get it now!