Face Warp Camera : Carve out the Chaplin of Your Friends 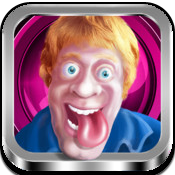 Do you love to play pranks with your friends and family? If yes, then let us suggest you one. Suppose you are to take a group photo, like something from a reunion. All of them are happy and willing to be a part of the photo frame. You focus the camera and after hitting some buttons, you click the photo. But as you show the photo, no one recognizes himself in the photo but some cartoons giving a ‘dude’ pose. But as soon as they recognize that they are one of them, all they can do is stare for a moment and start laughing. Wasn’t it amazing? But then everyone will ask you of how you did it. Then, this will be your answer. Here we have the new iOS app, Face Warp Camera that has been developed by STOIK. The app is compatible with iPhone, iPod touch and iPad and requires iOS 5.0 or later version. It has also been optimized for iPhone 5. We have seen many caricature apps that are mostly same in the concept just that one or two additional effects are added to the complete package. But this one is very much new. We’ll show you how. The app is capable of real time warping effects i.e. the app recognizes any face in front of the camera and you can apply any one or all of the four effects right at the moment. When you’re done modifying the face of that someone, just save the photo and show it to your friends. So the person no longer needs to stand still as the camera recognizes the face and keeps it intact with the right emotions at a fast pace. The four available warping effects are: broadening the nose, eyes popping out, twisted mouth and elongated chin. The warping effects are hilarious and can be combined together to worse it even better. We really had some fun time with our friends while checking out the app and it is a good time killer even when you’re alone to check out your different shades. Moreover, the app is compatible with both front and back camera and you can switch between the two with the button on the bottom left corner.

There’s a lot left untouched by the developers. First, there are just 4 warp effects which really restrict the app utility. Second, there is no integration with any social networking website or email so that we can send or share our pictures. It is a must have feature as these kind of pranks are meant to be shared (unless you’re afraid of the poser) with your friends. Also, some photo filters would have been appreciated provide that finishing touch to your photos. The app is available for free in the App Store and is a must have for everyone. Though it misses out on some points, but anything that’s present is a worthy download.