Cutetown San Francisco: Build your own city in 3D 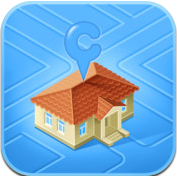 When you are new to a city and don’t know how to go about it, the very first option that occurs to you would be maps. But again, once you start using them, the chances are that they might not be all that useful as you won’t be able to differentiate one building from another on it. This is when you would wish that building on maps could like 3D and resemble the actual buildings. Well, your wish has just been granted with the Cutetown San Francisco iOS app. With Cutetown San Francisco, you are the cartographer. While Google Earth provides the basic satellite imagery, the idea of this app is to build on it to give a small-scale 3D replica of the city. It must include all the components of the city. This app is not an individual app but is a community one. There is an elaborate tutorial to guide you through the process of building your own 3D replicas, without the need to be an engineer or architect to get going at it. You just need to collaborate with others and build the best possible map of San Francisco. Only this one will not be fuzzy and colorless but a vibrant and clear one. Constructing cities with this app is very simple. Just select a building of your choice from the satellite image. You then demarcate its boundaries. You enter parameters like number of storey, windows, doors, courtyards and other features of the building with their locations. The controls aren’t simple but once you get used to them, the task becomes very easy. Cutetown San Francisco has quite some features worth boasting about. For one, it provides you with a superb high resolution map of Stanford University, which portrays what it is really capable of. It is the best place for students  and visitors to refer to get an idea about the university. This app allows you to take credit for the buildings you design by signing it. This is a great way to acknowledge one’s effort and applaud their effort. For it indeed does take some time when the building at hand is a huge tall skyscraper or the like.

Cutetown San Francisco app is compatible with iPad and is free. This is for a short time only though. While the app is presently only working on the city of San Francisco, it is expected to be expanded to other cities too. This will be a boon indeed for travelers. It is the first and most exciting step in the direction of building buildings in a digital world to form a city. The controls of this app are precise and it takes some patience indeed to build a replica of a building. The user interface is well designed and creates the right mindset for it. One major drawback of this app is that it is not accessible if you are not connected to the internet. It is for those who like 3D modeling and enjoy it. So, begin building your city, one building at a time.