Buster and the Crystal Bones- A Route to Adventure 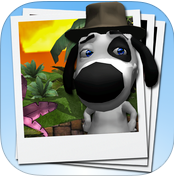 If you’re going from your home to office, even travelling in a time machine would be boring after some time. So if you wake up in the morning, get ready for your office and take the same tube to your office every day, we can understand how yawning a journey it can turn out to be. You’re facing the same faces, looking out through the same window at the same buildings and suddenly it hits you that you’re carrying a phone that’s called Smart because it can entertain you anytime and anywhere. But even the music tracks have expired now and you’re looking for something more exciting; something that can rejuvenate you and make your journey a little bit more interesting and exciting. Would you mind jumping out of that train and taking a different route to your office, which is different or should I say difficult but very adventurous? Are you in? I’m talking about the latest iOS app called Buster and the Crystal Bones that has been developed by Buster Studios. The app is compatible with iPhone, iPod touch and iPad and requires iOS 7.0 or any later version of the OS.

Buster and the Crystal Bones is a journey that you better not miss because what’s about to come your way is the unexpected. Buster is a dog, an adventure-lover, who’s just started on an adventure where he’d be facing some of the deadliest challenges of his life. And what’s all that for? Crystal Bones! It’s obvious for a dog to love bones and therefore he doesn’t care for what stands in-between. There are many different enemies that you have to tackle, obstacles that you have to avoid and then there’s always a risk of an untimed-jump which can take you down in the water or in the unfathomable space. So risks are lying there like bombs in a mine field and you have to carefully take every step. One must appreciate the efforts of the developers who have not only managed to design a mysterious atmosphere and a dark environment in some challenges; they have captured the exact opposite flavor in other levels where they have favored for a happy charming theme. The game puts a very bright, colorful and crispy display on board that combined with 3D graphics will blow you away. Overall, I would say that the game puts a lot of variety on plate in terms of both gameplay and graphics. As far as the gameplay is concerned, it’s very dynamic and vibrant. You can feel the weight of the jump and the depth of the road. The developers have added in many different ingredients that’d spice up your adventure even further. Simple navigation and jump controls are just an add-on. So the situation is very much clear now. You’re getting a beautiful, sensational and thrilling adventure for just £1.49. What more can you bargain for!