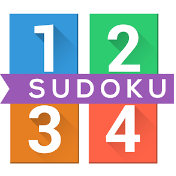 If you want to sharpen your mind, then you can’t find a better exercise than Sudoku. The game is played by many and there are many people who have a hobby of solving a Sudoku a day as it keeps their mind focused. It’s like meditation. So when there are apps for meditation, why can’t there be an app for Sudoku? In fact, there are many apps available in the market that allows you to solve puzzles on the go. But the problem is that you still have to refer to a pencil and a paper to solve the puzzle because solving a Sudoku requires a lot of rough work, guesses and eraser work. This requires some extra space. But if we can use your screen space effectively, it’s sufficiently enough for everything. So from now on, don’t bother getting your pencil and paper before solving a Sudoku. Just make sure you have Sudoku Free. Sudoku Free is an Android app that has been developed by Astradia. The app is compatible with all the devices running Android 2.2 or any later version of the OS. Sudoku Free eliminates the requirement of both pencil and paper. It gives you the provision of choosing between a pencil and a pen and you can switch between them anytime during the game. So the numbers you’re sure about, you can mark them with a pen in the box and the ones which you’re not so sure of, you can mark them with a pencil and they’ll be written in a short font so that you know the difference between the two. You can always delete any number, pencil or pen, with the eraser. You can mark more than two numbers in the same cell and they’re all clearly visible. So this is far better than your rough work which is very clumsy and sometimes even gets your calculations wrong due to wrong misinterpretation. Apart from a neat sheet, you also get some other good features with this app. For example, if you want to know all the locations of a particular number in the entire grid, simply tap on it and they’ll be highlighted. Moreover, your progress is automatically saved when you exit and you can resume from the same position later on. So now you don’t need to carry the page, you solved your puzzle on, everywhere you go.

Sudoku Free comes with 5 different difficulty levels. So it doesn’t matter if you’re a beginner or a pro, there’s a table for everyone. Also, every time you press the play button, you get to solve a completely new and unique puzzle that you’ve never solved before and never will. So the possibilities are just endless.

Sudoku Free is a very beautifully and gracefully designed game that you all would love. The app, as its name states, is free. So don’t wait anymore! Go and grab your share now!