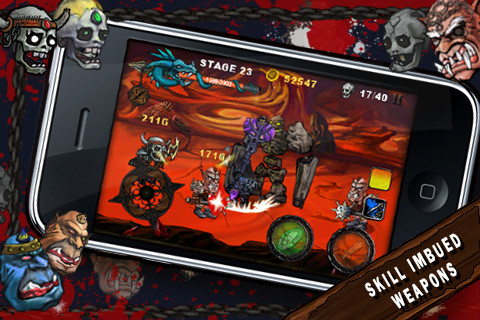 Looking for an entertaining RPG game that you can take everywhere with you for those times when you’re bored?  If you’re looking for a medieval type of game, Dark Knight is for you.  The game’s campaign mode provides hours of battles that include 77 levels of pure action.  Want to give your knight an edge over everybody else?  Buy some death knight points in order to add skills to your weapons as well as armor and shields.  There are five weapon classes to choose from, all of them have their own special attributes and the 6 different weapon grades have visible differences. So, if you’re looking for a new experience in RPG games for the iPhone, iPod touch or iPad, this game is a great way to start looking.    The game is pretty similar to other RPG games where you beat the regular monsters through each level in order to face the Boss later on.  There are 16 types of enemies, so you will never be bored of defeating them.  As you finish each level, you travel around the “world” inside the game, which definitely makes it more interesting. As far as reviews go, this game doesn’t have the best rating from users.  The low ratings could’ve been an old bug because recent ratings rank the game at five stars with very few details on how to make the game better.  Some even say that the game needs one more campaign level.  Only you can be the judge of that by trying out this game.  The arena mode is more of a head to head challenge where you can prove that you’re worthy of having a death knight. If we could compare this game to any popular game that you may know of, we would say that it has the same gameplay as Runescape or Maple Story, which are popular games for PC.  This would be the iOS version that will always be free to play.  Remember that the more bosses you defeat, the more gil you will get to purchase upgrades and new weapons, so try Death Knight out.