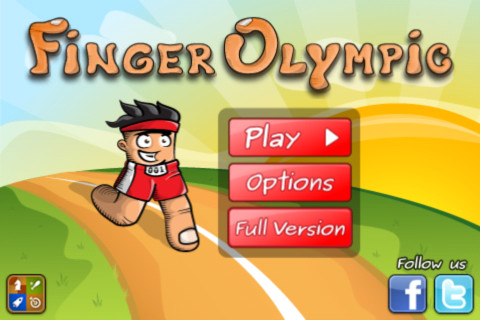 Are you bad at sports?  Would you like to impress someone by actually having a worldwide record for exercising?  Then look no further than Finger Olympic, where your dreams can come true within a lot of taps on your iPod, iPad or iPhone.  With over one million downloads, you can tell that Finger Olympic is becoming one of the select favorites of the crowd.  For now, the game includes track and field for your fingers which consist of tapping the screen as fast as you can. Now the game is not all about how fast you tap the screen, you need to know how and when to save up energy just like the real Olympic Games.  You play as Digit and you can pretty much guess the names of your opponents.  Your opponents are Thumby, Pinky, Yubi and Toe and they can easily outrun you if you don’t wise up and learn how to beat them all in the race. Finger Olympic allows sharing of scores through Twitter and Facebook, which allows you to compete against your friends or invite them to join the game!  You can also compare your scores to others worldwide and speak to them through the official Facebook or Twitter page.  The game is simple enough for kids to try it out as well as adults who want to relieve some stress. When you look at the user reviews, you shouldn’t let them fool you because this application is free to play.  Most applications start out with many bugs and they get better as updates come and go.  Finger Olympics has a full version in which you can unlock more levels and races for just 99 cents.  Whether you want to pay the money up front for the full version is your choice.  Most users rate it at three stars and it is due to a mix of 5 star reviews and one star reviews due to bugs.  The final word on this application is that you should definitely try it out free and move on to the full version because it seems to have a lot of potential.